I missed my last week at school due to some planning, friends and I had been making for some weeks. Someone had arranged for lots of my music heroes and others I had not heard of, to be at a Festival in some obscure bit of England called Bath! This was the height of Cool. Woodstock had happened and Dylan had done the Isle of Wight the year before. I didn’t get there for various reasons, no money, no idea of how to get there, no friends to name some things. Now, apart from festivals being, as I said the height of cool, this had to be done. I still had no money (tickets cost 50 shillings/ £2.50 ) or concept of travelling but I had friends!

So after extensive research and planning, ie  “I dunno, do you?”, we decided to go. John and Alan would go as a hitching team while Billy and I were together. Easy enough to start. But Bath is a long way from Edinburgh!*

I had some hitching experience, mostly around Central Scotland, even Fife! Callander was a bit of a habit, I’d maybe been 3 times in as many years. This is where Billy and I were sure we seen Hitler being driven around in an old Ford Anglia car. Discretion was something he had got used to by then I would have thought.

Hitching was quite easy,  John worked for a haulage firm in Leith and he got us started with their lorries. Lorry lifts were the usual. No great insurance worries and drivers usually liked a bit of company. I remember the driver who eventually dropped us off at the festival sight, a local man with opinions on politics and the world, he warned us that the Middle East is the coming trouble spot for the future . I had never met an “intelligent” lorry driver before, I enjoyed that encounter.

Long haired kids were a bit of a novelty and not too much of a threat to the car owning folk of the time. These would be lower middle class at least, no family’s. One couple I remember being intrigued by us, I think they were pre-emptying arguments to stop their kids the day they might ask to hitch. They were friendly but wary.   Motorways were new to us with their Service Stations with cafes and place to stand and wait for your lift. Lots of folk around and toilets!

Another good thing was when you got your lift you couldn’t be dumped till the next services so we got there with very few lifts I suppose. I had known to take five lifts to get to Fife.  Quieter roads made it all a bit more friendly.  I really don’t remember much of the journey, we only slept out one night, no idea where. It was almost 50 years ago I suppose! But we made it. 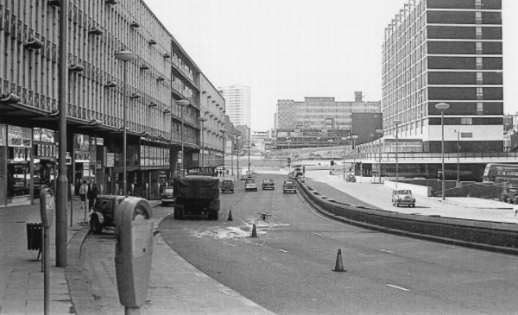 One thing I do remember is walking through Birmingham, feeling very very travelled. There is a district there called Rubbery. The local skinheads graffitied their logo on walls,  “rubbery skins”.     Well I thought it was funny!   Anyway we got to Bath or somewhere near and they all spoke funny.  The music started on Saturday and we were there by the Friday and amazingly met up with Billy and Alan very easily given that there were up 150,000 people there eventually! We could only get half pints of the local drink ( scrumpy, serious cider ) and started to be part of “an event”. I’ve meet many folk since who said they were there and it did become something a bit seminal for my age group.

I don’t remember being overawed by it, I should have perhaps, but I almost took it for granted that this is what you do. In a way nothing is “new” to an 18 year old, having never done anything before this was just what you do! But suddenly we were there! In a huge crowd wandering about being lost but not concerned. We got one of the Festival tents, fitted about eight folk. I don’t remember anyone but again this was what you do. And suddenly I was watching Frank Zappa….Frank Zappa ! He threw fruit and veg’ at/to the crowd while playing “Call any vegetable” I was possibly overawed then, if not by Pink Floyd.

But a continuous troop of bands kept appearing and changing, I do recall not liking Led Zeppelin, thought they were too loud. Other folk seemed to like them though. Not being aware at the time, in good hippy manner, we knew nothing of the chaos of the running of the place. I have read stuff since! A example was no bands around for about two hours, transport problems, very blocked roads. But all I knew was that Donovan, who I liked , done a two hour gig. He was in the crowd and sussed there was something up and came on stage. After the first day I, and a lot of other people, had a really red tan down the right hand side of our faces only. Sitting facing east for eight hours! 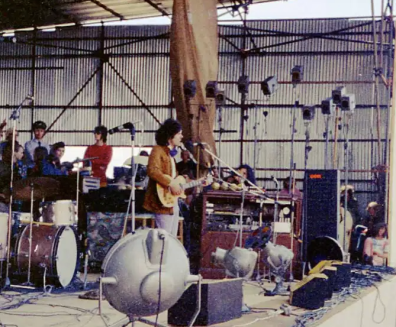 I don’t remember the drugs at all but that has got to be down to “it’s what you do !”  I had some experience by then. Tried speed once. What a stupid way to spend your time, rushing about all night! Drugs are for relaxing, not that cac! Acid a few times and joints now and then. Not particularly impressed and not sure that they done much for me. I told this to Billy a few years later , he had got into the scene at the festival and started dealing when we got home. I stayed at his place once and he decided to teach me what it was about with one large strong joint!  “Well you were really gone last night,” he pointed out to me next morning with a smile. Happy at proving his point, ie; he was a good dealer, my point was, I didn’t remember anything about it, so why bother! Billy died from an overdose (with, not from) soon after this. I never liked not being not in control, even titularly, Even now I don’t like being drunk, though I obviously like drinking!

We got to sing-a -long with country Joe and his anti Vietnam song meaning we got to shout “fuck” as a protest.  What were we protesting about? As Brando said “…what have you got?“

That’s how cool we were !

Anyway, Monday afternoon and the last act finished. “Dr John the night tripper” . A name and a description of an act. Didn’t really have any impetus at lunch time.  “What now!” at least one of us said . We went for a bit of food somewhere and came back to our tent.  It was gone!

what little money we had.

A much more appropriate “what the fuck now” was heard!

What now, as it happened was the chance to stay on for a few days and pick up litter. Which we did. Probably a lot less litter than now, a lot less street/junk food around, but certainly a lot less awareness of green concerns, so there was more of it. We had a few enjoyable days in what was now a quiet field filling black bin bags at one shilling a go. We amused ourselves by knocking over five day old very full WCs and running away from the smell!

Anyway, one or two last half pints of scrumpy in a now peaceful pub and we were homeward bound. No memories of that journey now. But we made it.

Often thought of going back to the site for nostalgia’s sake, maybe this year as a 50th anniversary, maybe not. Somethings are best left in their boxes.