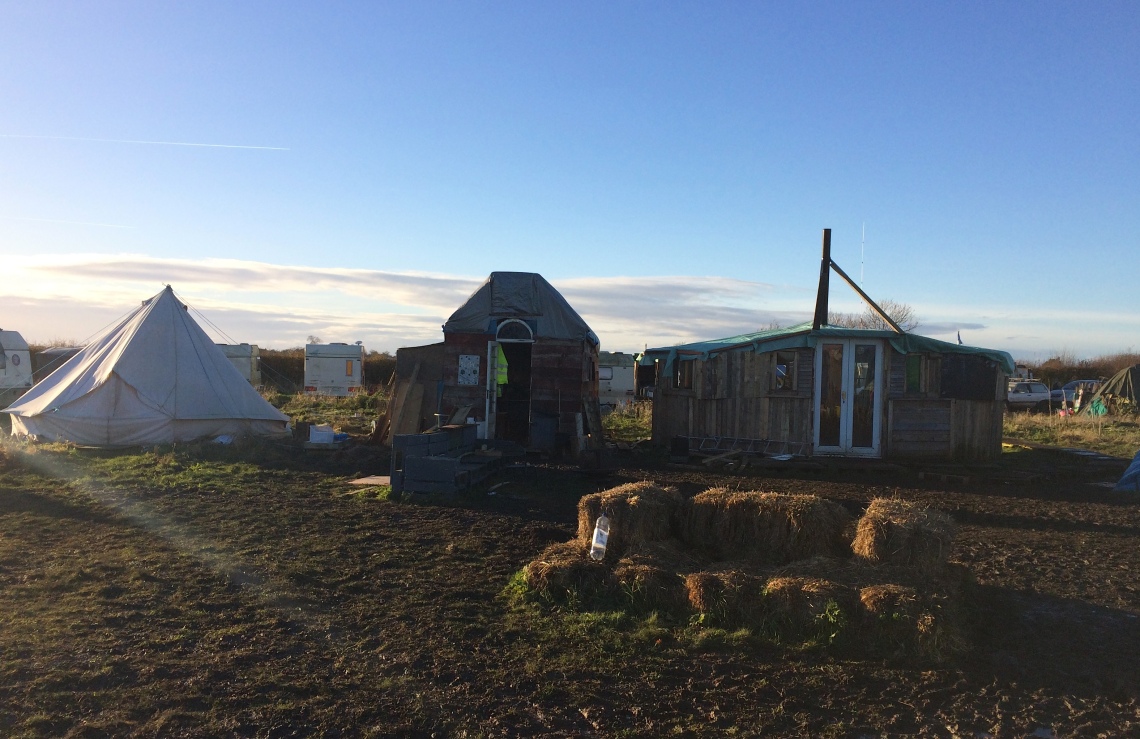 On a clear white November morning, I was driven down to the anti-fracking camp at Kirby Misperton. Situated south of the North York Moors National Park, it is scheduled to be the first official frack site in the UK. Wooden structures kneel haphazardly from the ground as a series of pallets offer ‘stepping stones’ to what has become home to some. Amongst the mud and the warm smiles, I was given an opportunity to meet the people who are engaged in a truly David and Goliath fight against the energy giants.

Fracking is a highly contested process of fossil fuel extraction. In camp ex-oilfield executive, Ian, 61, delivers an impromptu talk on the subject and explains just why we should be apprehensive about its use. Growing concern has resulted in many countries completely banning it – including Scotland. As it continues to slide from public favour, with as little as 16% in support (1), tensions here at camp have escalated, as fracking will begin imminently.

The resistance towards fracking centres on what many now believe to be an antiquated means of procuring hydrocarbons. Public opinion resides with renewable energies which are cleaner, safer and often more efficient. Fracking requires up to 10 million litres of fresh water (2). The water is then paired with sand and a litany of highly corrosive chemicals, which then are pumped thousands of feet into the earth’s crust. Those that challenge the efficacy of such practise understand that the now highly contaminated water, and the residual run off (up to 60%), will be unaccounted for (3). Not only is the water now irreversibly polluted it is likely to seep into the aqua fir and water sources.

At camp people have come from across the UK to protest against the future of fracking. United in their solidarity, cohesive in their struggle, they are fighting for the protection of the land and all sentient and non-sentient life on it. Shoulder-to-shoulder, hands clasped, they stand at the foot of an unimaginable power.

Pale blue skies stretch the length of the horizon as cold damp feet are gripped by thick mud. My arrival at Kirby Misperton coincides with what many believe will be an important announcement in the morning. Greg Clark, the local conservative MP for Tunbridge Wells and Secretary for Business, Energy and Industrial Strategy, hangs the balance of power in the flick of the wrist. It is his signature that will give the go ahead to Third Energy to begin fracking.

Back in 2011 Mr Clark heralded that local councils should ‘wield real power’. The irony of this now incongruous statement seems all bust lost on Greg. As objections were heard last year from Ryedale District council (4) the Energy Minister is intent on running against the democratic will of the people. Third energy, which holds drilling rights at Kirby Misperton, is a derivative of Barclays Bank, which is a 97% shareholder in the energy company. Under enormous public scrutiny many have called for the high street bank to divest from this bad investment.

Ineos, who have fracking license over 1 million acres of land (5), are redefining the parameters of how we can peacefully protest. This year they have hauled through a number of highly controversial injunctions in closed courtrooms. The injunctions stem from the companies will to protect its workers against supposed militant activists. This gives Ineos license to make profit in the face of people’s right to protest against unethical decisions. Cruel invisible lines, etched out behind closed doors, highlight the imbalance of power and reveal that people’s will and environment are second on the agenda.

It is the ordinary people who have come together to join the fight that we see hope. Laura, 62, a retired schoolteacher, the evening before jokes, ‘I could be out enjoying myself on cruises’, instead she is here. A lifetime of being told to obey the rules she is putting her body on the line for the betterment of the next generation. Anne, 27, Darlington is quiet, sensitive and fierce. She prepares food for 25 activists under the meagre glow of the fairy lights. Full stomachs give fuel to fight. Her part is as important as anyone else’s out there. David, 24, a retired snooker player from Tumbridge Wells, is calm, collected and considered. A mediator between actions, he holds the balance of the group, carefully taking in everyone’s thoughts and emotions. It is the people who make the collective possible. And everyone, no matter his or her part, has a place in the struggle.

Stood on the entrance of the fracking site, with our backs to the police and the private security, the weight of the struggle bares down on our small group. Surrounded on all sides, kept in close proximity, tensions builds like the steam of an old kettle. We are dismissive towards the police who can act with total impunity. Their presence, and the innumerable laws that keep us physically constraint and bound, prevent anything other than clouded or erratic movement. Under the cold scrutiny of the officers, I’m held in a position between hopelessness and anger.

Arms tie around arms as open eyes offer something to hold to. We tighten our limbs at the heels of this giant monster. Stern faces read our rights yet we remain rooted to the ground, anchored by fear and uncertainty. Heavy hands forcibly wedge us from the road – deemed an obstruction to the highway, an obstacle to profit.

Close to here fickle minds gargle crude power as greed and corruption spill into soil. The struggle dissipates as we are forced into submission – for now. The horizon may look bleak though there are streaks of light beginning to break through. The energy giants are not impervious from change. Activists that weekend have defaced high streets windows with the words ‘toxic bank’, building pressure, and forcing Barclays into a position in which they must divest. Every action is part of a process; every person has her or his part to play in the change. 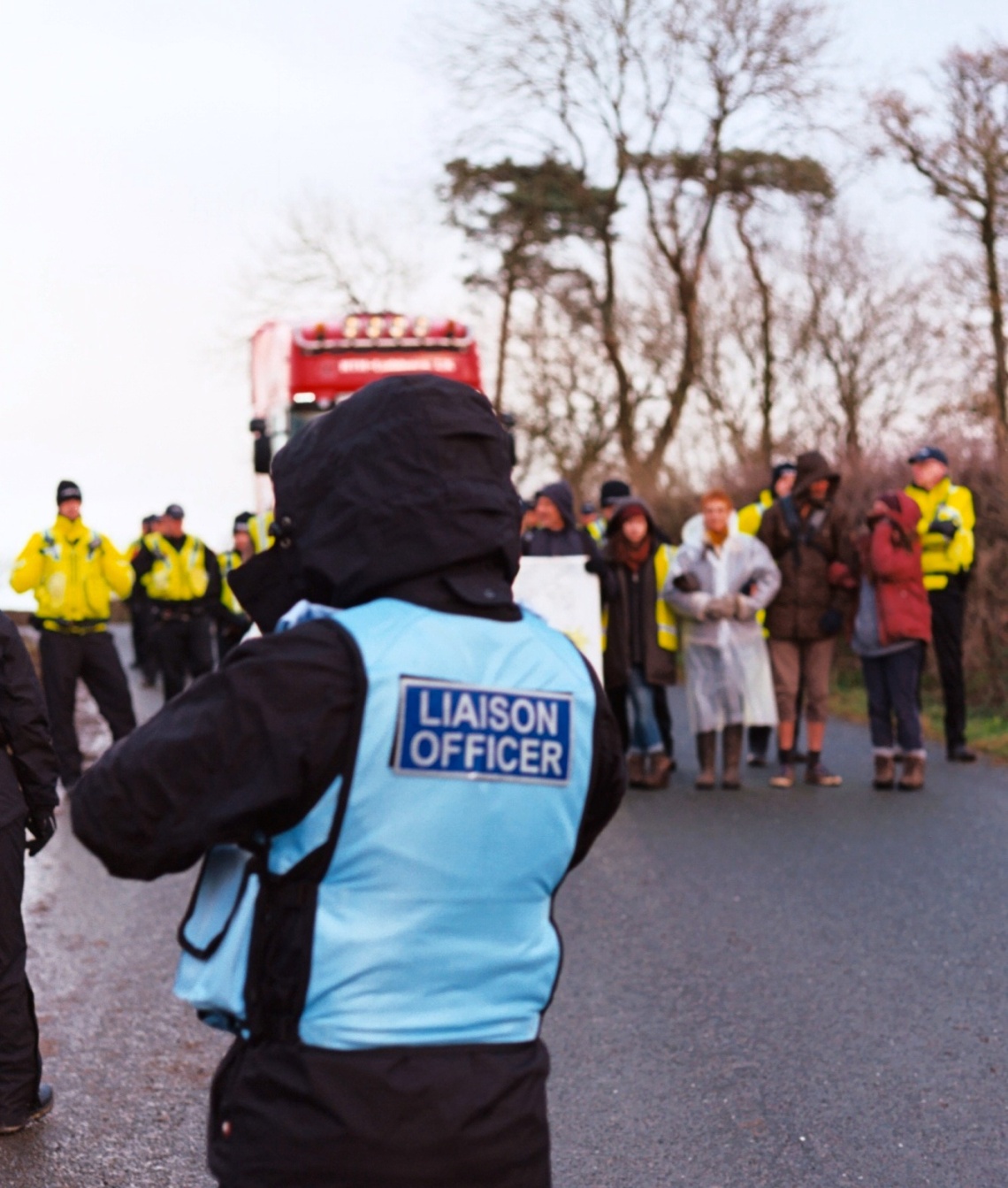 *all names are fake to protect the interest of those mentioned