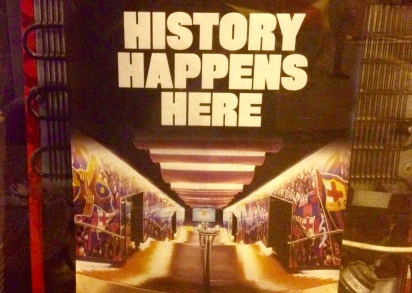 The flowers bloomed as red and yellow bees buzzed around us. The Government had declared independence barely an hour ago and now through every avenue we walked, we weaved our steps more and more into the fabric of history. In the blink of an eye we were in the hive of Plaça Sant Jaume, swarmed by tens of thousands. The emotion was reminiscent of the days leading up to indyref in Scotland. But this was bigger and this was more defiant. In Scotland, the crowds were out in anticipation of the next step, in Catalunya, against all rationale and reason, they were lunging.

Media outlets regard this as separatist, the word choice so deliberate, and positively effuse Spanish supporters as ‘pro unity’ as if unity between people can only come from adherence to a larger state. These people around us were not divisive.

Emboldened and reaching out to the world, they displayed a togetherness with each other based on hundreds of years worth of history that today was writing a new chapter. Opponents call these moves divisive because it challenges their positions. But they don’t have to use this language if they truly don’t want division.

Signs adorned the ornate, old buildings pleading ‘Help Catalonia SAVE Europe’. The principle of the movements on the streets and those camped outside Parliament imbues a confidence that this could work as a new theory. One that could lead to greater social integration across all lands and all intersections of people whilst understanding the cultural strengths of the place they are rooted. Bureaucratic blocs of state control are severing people from the land they live in and forcing people to adhere to a spiritually bereft dogma of neoliberalism. The division comes from a refusal from those in power to compromise themselves in understanding where opposition to them truly comes from. And so it will continue if they do not relent. 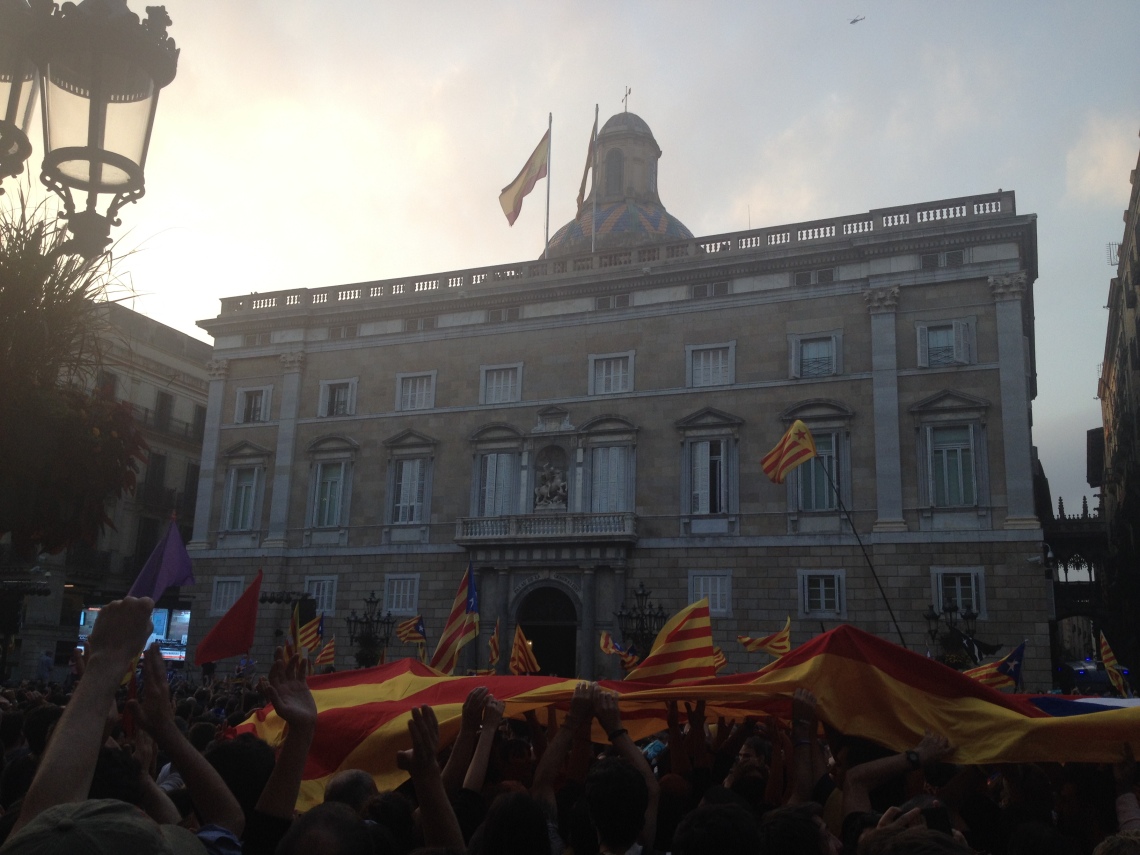 The rattling rabble of Spanish and Catalan clattered around us and all we could do was observe. This was not our moment. We had come from Scotland to understand and show support to an idea but through the throngs, there was little point of interaction to be made. It wasn’t for us to interrupt the voluptuous cheers of people to explain themselves to us. It was a peculiar feeling, standing in a place with no prior physical connection, observing a moment that will be told of through the ages.

But then we left and went down just one street. Whilst the people of Barcelona stood together on their land, those from afar were walking in an isolation. This manifested itself in poverty and prosperity. With no connection to where they were, people were bobbing on differing sized rafts of capital. Without local dialect, forced to speak a globalised form of language, one drowned in consumerism and struggling for humanity.

Tourists ignored the monumental occasion and thronged bars on other squares. Street sellers from undisclosed places walked the tables, forced into economic servitude, seeking release from the pursestrings of others from other places.

With outstretched hands, the beggar’s back looked to the sky with his head buried deep, as his knees kissed violently with concrete. The burning bright light of a golden arch allowed passers by to bypass his pain.

In the hostel, the worker told us not to get involved because it would be violent. The white dove carried high by elderly Catalans who had lived through Franco suggested otherwise.

The Latvian man in our room said he came to Barcelona to sightsee and wasn’t sure if politics would impede on this. And in 1989 people worried if a wall coming down would lead to congestion on the bus tours in Berlin.

. Hungry, we needed to eat, tired, we booked another night in the hostel but fuck, we were trying.

We attempted to lace our interactions more with the immigrants of Barcelona. Though broached by transaction, we wanted to find what this idea meant for them. We walked with two boys from Nigeria and Ghana through the backstreets. They live here and said they appreciated what was going on but didn’t feel it was relevant to them. Peter from Nigeria told me that back home male twins are called Peter and Paul. It was a nice moment, gently intimate. He then affirmed these names are used in Africa because of British colonialism.

In an ever connected world, all meetings with people carry a strand of unfinished history and the continual effects of this cannot be ignored. If activists, reformers and dreamers from Catalonia to Scotland are truthful about wanting to build a better world, we have to bring these people into the conversation, otherwise we’re doing nothing more than repurposing imperial window dressing.

At the end of the night, I bought a flower to understand the seller’s background. He came from Pakistan seven years ago, had no wife, had no children and every night carried a bouquet devoid of romance. Amidst the jubilation and the possibilities, who will give these tales a voice? On October 27th, people of Barcelona stood for their bread but a rose from Catalonia told its own story.