Exarchia Square sits in the heart of Athens and is where people fleeing war find themselves descending too as they chart through the labyrinth of southern Europe. Controlled by anarchists, it is a teeming concrete jungle made up of abandoned buildings and winding gridded streets riddled with a sophistication of politics, culture and sheer human existence. I found it to be the most interesting and vast melting pot of people, ideas and struggle I have ever borne witness too. Though the area was fierce, it was a place that harboured creativity, pertinence and oozed a grimy sex appeal, magnetic in its makeup. Without wanting to glamourise it too much, it stands as best it can against gentrification and operates in defiance and sometimes with violence against vein achievement, self-gratification and other materialistic indulgences.

There were major tensions though. Internal battles ran between locals and refugees against mafiosos. A North American man I met living in the squats was offered €10,000 by the mafia to give over refugee kids to use as drug runners. He refused them and then faced them down with all of the pressures they put on him. Loyalty showed and at all times there were hundreds of men from the refugee squats who had his back.

The real battles were with the police who were banned from Exarchia after, amongst other reasons, two officers shot and killed a 15-year-old child in 2008. Riots ensued and drove them out. Unable to dare step in, instead they stand around the perimeter twenty-four hours a day, armed and ready for any overspill of tension.

But community ensues inside. Exarchia is a place where real life meets real politics. All my moments were shared with strangers who would give you everything within the time of day they had. My stay touched only the surface but in the last few days I felt like I gained perspective on the depth of journey people are mired in here. Like gaping wounds, I saw the raw transient hell many are going through but also the indefatigable spirit of people to soldier on and use their strength to carry others through as others would carry them. It is a state of impasse they are holed up in. These are the marginalised. These are the men whom our country fears, these are the families our newspapers denigrate and these are the children whose smiles we don’t care of until they’re head down in the sand. They mean no harm to our ways of life so why do we allow such harm to theirs?

I met one man, barely 18, crack addled, his arm peppered by bullet wounds. Through the haze of his wild-eyed chatter he would still come greet you, offer a hug and stay to see if you were ok. I came away from Greece far too soon but left it feeling fired by an anger over the societies we construct that create the barriers that confront those as they try to seek refuge in the nooks of our lands. History will look back on the failings of humanity and those specifically in the west to have cared so little about these people when they clearly needed so much help. All I wish is that as many of us as possible defy the books that will be written and do something about it.

To find yourself out there is to see the enormity of the humanitarian crisis that exists but even though you cannot stop what is going on, every moment of work you put in will be of direct benefit to someone around you. And the longer spent there, the more you find yourself weaving into the stories that others had to tell. Below are just a couple of the tales I heard from my time in Exarchia.

“We are rats, we live like rats. This is no life for us. We do not want to be here. We are forced to live like this because back home we would be dead. Who chooses to live in a building like this? Who chooses to live a life like this? Back home we had what we needed, a way of life. But it’s gone now. Each of us has different stories, different dreams. People say we are just greedy that we come into Europe only for money. Well money comes and goes. We do not go through this for that. Ezequiel here wants to go to France to be with his children, Ahmed wants to be with his wife in Germany, Mohamed has his brother in England. None of us, none would ever choose this life over home, over family.”

“He asked me if he could open the door to let the cable for the power come through but I told him we must keep the door closed because the dog catcher is about and he’ll try to catch us.” 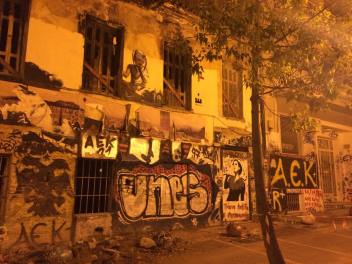 “The police tried to come here but we fucked them. Let me tell you, they tried to enter in here not too long ago. One hundred of them thought they could take the square. They had guns, tear gas, weapons, the lot. Us, we had stones. But four thousand of us fought together and we fucked them. We hospitalised thirty-five and the next day, let me tell you what they done. They sent in the riot police! Haha, not a fucking chance. You should have seen it! The stones came down like waves.” CRASH! “And they have not dared to come in since. We own the square. Yes, they tried to take it but we fucked them.” 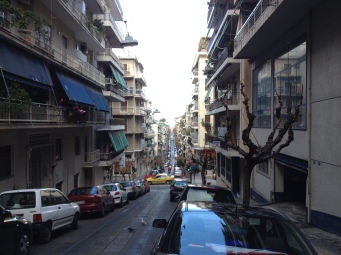 “I come from Ballochistan and I left because we are fighting for our independence from Pakistan and there they silence political activism. My three heroes are Nelson Mandela, Che Guevara and William Wallace.”