We woke up at separate times, in a haze, confused as to where we possibly were. I woke up with the cold sunlight of a Belgian November afternoon streaming in over my face, the glare of frost burning my retinas. I looked around thinking Liam had left so tried to formulate a plan as to what was to be done next. A bundle of jumbled coats and sheepskin jackets began to rustle across from me. They were indiscernible at first, I thought it was my stomach, leapt out of my insides, festering for freedom until eventually the bleary eyed, hoiking, coughing face of Liam emerged from inside the nest. At least there were two of us now but where were we and where did we have to go? We guzzled down glass after glass of water to try and compose ourselves. Coming from Scotland and growing up in the Highlands, you get spoilt with the quality of what comes out the taps. This Belgian dirge just wasn’t cutting it. That being said, the freshest glacial spring coming off of a misty mountain wasn’t going to undo the excesses of the night before. I felt like a salmon that had just been smoked alive, wrenched from my natural habitat, spending my moments confused, gasping for breaths as I lay there gutted and charred.

If only I had had an outfit to match. We had heard plans to find animal costumes for today but in truth had no idea what this might mean. Given that all we had done since we arrived was find the main building and get drunk, we were still struggling to grapple with any cohesion for this event. We ambled through the town trying to make sense of where we were, deciding that a coffee might point us in the right direction like wandering wise men following the Star of Bethlehem. We found ourselves trapped on Brussels’ equivalent of Princes Street though, a sprawling singular line of rampant commercialism and frivolous, hyper marketed pish. We marched and we marched, amazingly no amount of Coco Chanel or Manchester United football shirts was going to abate this hangover. A coffee and a misguided cigarette just about gave us the composure to charge on back to Zinneke. Once we made it back, we found we had arrived about three hours too late for the animal action but we were in time for a workshop on what TTIP and CETA were actually all about. 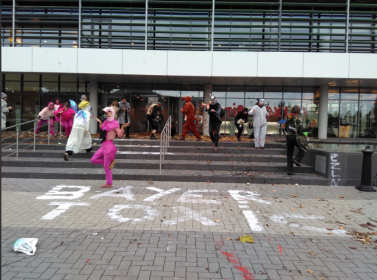 We sat around hearing more detail on just what the ins and outs of these trade deals were. The history of trade deals in principle has been to reduce tariffs and make trade easier between countries. What these new deals do though is allow companies o 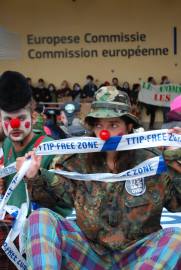 r corporations the right to hold government’s accountable for loss of potential profits if there are any barriers that might stand in the way of that. Therefore, for example, if a government decides to nationalise an industry meaning a related corporation misses out on any subsequent contracts, that corporation can sue. The ramifications of these court cases can run on for years and often governments, even in the legal right, may find that they don’t have the resources to continue fighting and so have no choice but to bend to the will of these groups. There are examples of this happening around the world and in Europe already. TTIP and CETA will bring these more harshly to the shores of our continent. CETA was in its final stages of negotiations this weekend and thus was the reason hundreds of activists had descended upon Brussels for direct events.

As we were mulling over what the ins and out of this was all about, everyone else it seemed had encamped themselves outside the European ‘liaison’ office of Bayer pharmaceuticals dressed as animals. From there, they began flooding into the building fighting in the name of nature after Bayer’s recent acquisition of agrochemical company Monsanto for $66 billion. This is a corporation accused of many the amounts of skullduggery across the globe. From what the video suggests, it was an incredible display of freedom and camaraderie. Even if these deals go through and even if the worst of the proposals play out as has been intimated, it is surely important that people let their voices be heard and speak out as opposed to remain passive. There is no point letting these things dampen people’s spirit. The worst thing one can do is see something wrong and do nothing about it. For me a weekend like this sparked something inside and I could feel the inferno rip right through me.

That being said, I still wince when I watch the video of the animals and know we missed it due to sheer fecklessness.

Over the next few days we would be plunged more and more into the lifestyles of dedicated activists, fighters and strivers. Those around us had such drive and passion that I felt enthused to act on the general principles I believe in and begin making tentative steps out of my mind and into the wider world. I admired the way in which these different peoples had come together and were fighting for a bigger cause. I saw the places they had come from and the struggles from their own homes.

I seen the reality of the battles they were fighting and I saw more of the interconnectivity between everyone as basic humans. In this day and age it takes less than six degrees of separation to find a lover, a partner, a friend in subjugation. When you see those things that seem wrong in the world, it is very easy to feel drowned out by apathetic voices, this idea that the ills in front of you aren’t of significance, won’t change the world. But if you know that there are like minded folk fighting like minded battles in different parts of the world then it is up to you to use that to enthuse and encourage you to keep on going. What was so poignant about this weekend of action was the ways in which all of these people had come together, so sharp and so ready because of the preparation and training they had given themselves at home. And that makes me want to take these things back with me and do the same myself. With that, I hope to share in this with those I know and hope can be empowered more in their own lives. 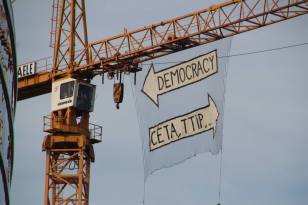 town, coincidentally to the same square we had wandered off to on the first night. As we walked we saw towering cranes by the European Commission, with banners hanging off of them. They carried anti TTIP messages.
I stared in awe at the prowess at whoever had climbed up to make this happen. I suddenly decided that if I am to become more serious about activism then this is a direction I want to take. But where to find these people? We kept on walking, seemingly it would never end.

We were to have an auction where everything was up for sale. Liberty, the environment and the planet itself. The whole charade took place in French but we gestured and cheered as intimated too. That’s the nice thing about crowds, no independent thought required. Always go with the mob. 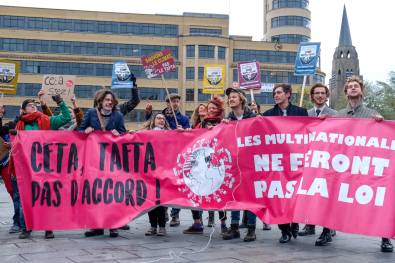 done. We dined as a sprawling group and left donations for the food that we had been eating over the last couple of days. From what I gathered, the caterers were a group of volunteers, locals, refugees and anyone else wanting to get involved who sourced food waste from across the city and put it all together for huge pots, dishes and any other modes of nutritional deliciousness. They then brought these along to events, protests and all general forms of activism taking place throughout the city. Again, ideas for back home were planted. Solidarity came in the form of people seizing the initiative and actually taking action.

People had begun putting the word out on a party downtown in an old administrative building that had been transformed into a squat over ten years ago. We all ambled along later in the night and were greeted with all of the faces we had met throughout the time here. Videos of other actions we hadn’t even heard of were played and a live band struck up an eclectic atmosphere with sounds from salsa to country blaring out from the stage. 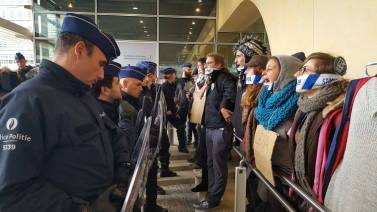 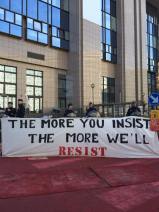 We winded down with some of the people met over the weekend and enjoyed the finality of the time here but talk of another TTIP: Game Over campaign invigorated everyone in the room. As we mused on what had been done and where we go from here a few of us begun to talk about the roots of the problems. We soon realised that of all the people causing ill in the world, every singe one of them had once started out as a child. We realised the controversy of our words but soon we were in unanimous agreement that if we fought the kids of today, we could stop the evil of tomorrow. We believed that this could also create a sustainable transition away from industrial farming and the world’s obsession with meat consumption. Thus Cannibals Against Children (CAC) was born. We don’t expect it to take off any time soon though we hope the paucity of our mission statement will win out and eventually tempt people over bringing them together in uniting against a shared and very real enemy.

These ideas may have come too soon so we continued to enjoy where we were in the present. Iva, Liam and myself done the rounds, we said goodbye to those we had met, with hopes to meet again, said hello to new faces then followed that up with similarly heart felt farewells before making it back to our hostel for a light sleep before a new adventure the next day.

We woke up and found ourselves in good time to make it to the central station we had arrived in on the Thursday. It was a Sunday morning so it was quiet but despite the desolation of people we eventually found signs of life and it happened to be just who we were looking for. A bus of Dutch activists were heading back to Amsterdam and had spare seats for us to jump on for €10 each. We clambered on and got chatting. I then discovered that I was sat beside the very people who had scaled the crane and dropped the banners. My heroes! I forged connections, got some ideas and suddenly a new opportunity for excitement was opening itself up. 2017 could be the year of the climb. We spent the next couple of hours talking, writing, sleeping. It felt like no time at all before the bus had parked up in Amsterdam where the next segment would be about to begin.