In May I attended a protest outside of Dungavel Detention Centre, a premises run for the Home Office by private US security firm The GEO Group and used to detain asylum seekers who have seen their bid for refuge rejected or put on hold by the UK Government. Located vaguely in the south of Scotland, this day of action was part of a coordinated event calling for the closure of detention centres across 20 locations around the UK, France and Greece. Later that evening I went to a rave. I felt there might have been a juxtapose about my plans but as they unfolded I found a greater degree of similarity between the two than I could have ever conceived of. This is my account of the day and the ways in which I discovered the power of protest through celebration.

Getting to Dungavel is not easy. After collecting our car, we had to navigate the seemingly endless back roads and roundabouts to get there. This journey itself gives you a sense of how deliberately hidden away these people are from our society. The roads that connect them with proper towns and villages are eked out like the carvings of a blunt knife on skin. Hostile yet undefined. It was a dreich, grey day in the back end of nowhere this Saturday but what day of the week would it not be dreich and grey if this was your permanent locale? To be confined in what amounts to a prison there day in, day out would take a toll on anyone. On top of that, the people locked up inside have no choice but to adjust to this miserable climate.

Amidst this backdrop, I would be inspired by the indefatigable spirit of everyone involved. A crowd of a few hundred or so, mostly coming down on buses from Glasgow or Edinburgh and from all different strands of life before that had descended around either side of the great wall to show support, solidarity and love to the people enclosed inside.

On arrival, I met three men from different parts of Africa who knew that there were people from the same countries as them inside. Sitting on a fallen tree, sheltering from the winds, they opened themselves to offer tea. They were living here, working and studying, doing things no different to what anyone else does. They told me those inside would want to be doing the same but instead had been locked up. Who wrote the rules on this form of Russian roulette and who did they write them for? 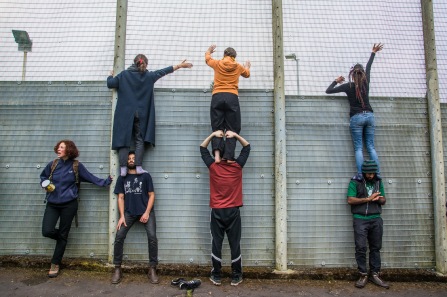 As we got up off the tree and began walking with our new friends, we entered into a carnival of sound as the noise began to penetrate the wind. Each decibel issued a cut to the jagged iron bars. I have never before picked up on such a full, dismissive act of defiance before. There we were, people no doubt filled with anger in our day to day lives, fuelled by injustices we can seldom do anything about, standing in front of this physical embodiment of the wrongs we want to fix. And on the other side were stories I can barely begin to comprehend. But in the greasy rain, we had gathered together. Those locked up stood outside to show us they were there, greeting our noise with voices of their own creating a perfect channel of energy that just for a moment eviscerated the barrier that stood between us. The wall that day to day binds them from the world and from common humanity was made fleetingly irrelevant. Music was played, dances were shared and all the while, there were megaphones used for people to project themselves into the prison courtyard. People spoke in all of the languages of those inside. The poetry of Kurdish, Arabic and French filled the air.

This show of strength resonated with me. Surrounding us were people who had their own reasons for being in Scotland but were free and were standing there at the gate to let these other humans and compatriots know that they hadn’t been forgotten. And it was not only people who had the familiarity of a shared language and empathy of the personal struggle that were there. Over the horizon, they had brought others. Others who have never had to consider navigating the traumas suffered by others and who likely never will, but had come to try and provide hope.

Hope in the solidarity, hope in the willingness of people to turn up and hope that they will build on this and do whatever the next thing that is needed of them may be. To turn up outside of a prison to shake your hips is meaningless but do not underestimate the power of such actions when aligned with the desire for further change. The moments living in the present just have to keep on getting better.

With the ability to leave, we left, willing that those inside might find a sense of rejuvenation to take on their isolation in the coming days, weeks and months. We drove off to Glasgow to pick up a pal, before heading west, back home to Oban for a secret party in the woods.

After being provided with dinner, we drove again. For twenty miles we eased past lochs, hills and an ever quickening sunset and after some wrong turns on dirt roads, emerged through the wilderness into a beam of light, noise and people. 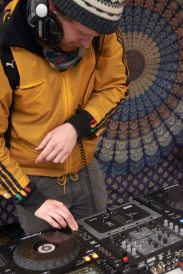 We parked up and waded into a sea of familiar faces. Stretched out before us was a litany of warm embraces, powders, pills and the swirl of pungent smokes in the air. 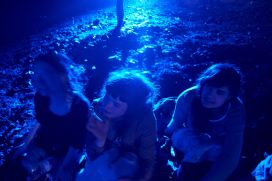 We could not have separated ourselves any more from the
claustrophobic jail that we had been in front of just hours before but perhaps driven by that awareness, we saw how free we were not just in this moment but in life in general. What a privilege and a pleasure it is to descend into a place reserved for the faces of those you have grown up with. Hidden away with no one but those you care for knowing of your whereabouts and no authority 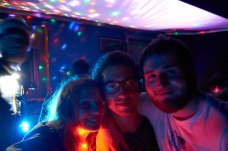 figure daring you to step out of line. And what was done with that freedom? Music was played and dances were shared. For the whole night, there was the same level of love emanating from those around us as earlier in the day. 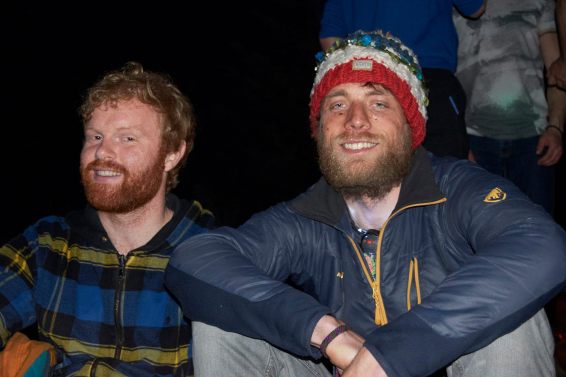 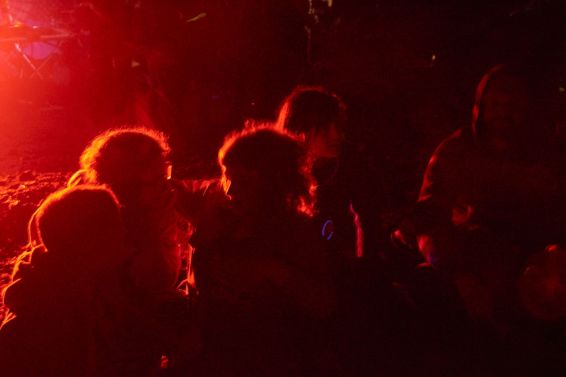 I looked around at the ravers, the smokers, the madcap misbehavers and felt that despite the infrequency with which we are all together and the disparate paths our lives will continue to take as we grow up and grow older, the unanimity I feel with these people through this connection, built on a sense of place, means I would do anything for them. And if things were the other way around they would do the same. Should the people inside of that detention centre not have these same rights? Are there not parties and music and dancing waiting to emanate from their homes? Our Highland utopia was one that could be replicated in any corner of the world. Surely it is an honour to try to help others find that again? It doesn’t take much of a leap to bring these people into your life. 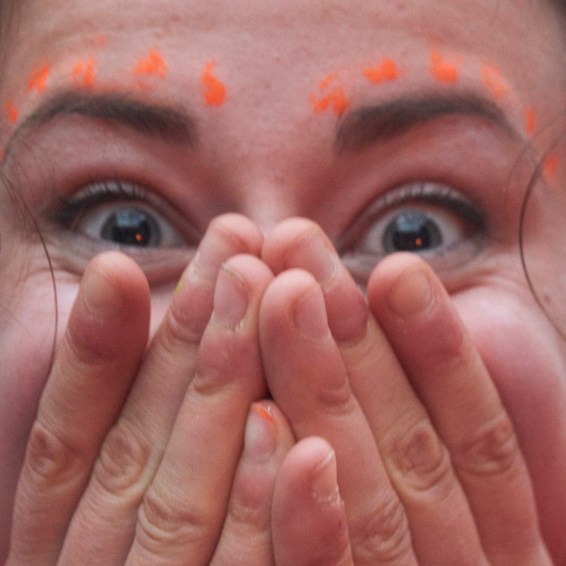 If those closest to me were ever in need of help and support and no one they knew were there to provide it for them, I would be overjoyed to find a group of strangers in a distant, far away place were standing in the rain cheering them on. 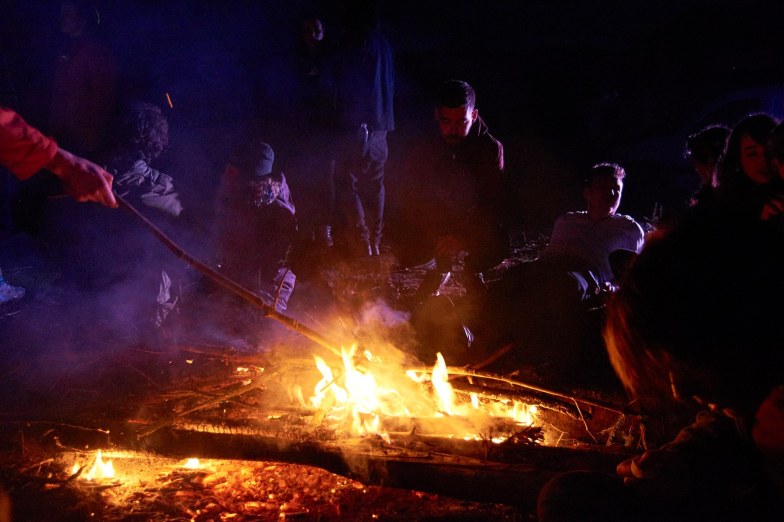 Sometimes you can find yourself getting so worked up about the things that are wrong in the world that it becomes all that motivates you. And sometimes that is necessary. Sometimes though, by celebrating life you can make the biggest impact. What I took from the day was that if you embrace what is beautiful, shared and present in all of us then it is possible to light up the darkness. It can illuminate paths that will take you through to the dawn and to a place where people live to work for one another. And it got me asking, what should we do anything for if not for that?